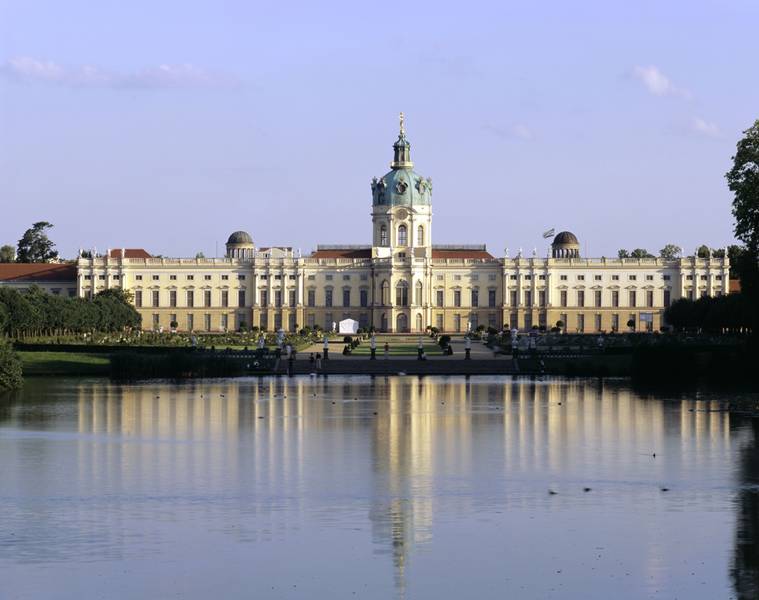 Charlottenburg Palace, view across the ornamental pond to the side facing the gardens © SPSG, Photo: Hans Bach

The Charlottenburg museum quarter exudes French flair. Modelled on Versailles, Charlottenburg Palace with its Baroque park was built from 1695 for Sophie Charlotte, the wife of Friedrich III, Elector of Brandenburg, and later extended around a Cour d'Honneur. In 1740, Frederick the Great had the east wing added, with its ornate Rococo rooms. The Palace was badly damaged during the Second World War, but was rebuilt and restored to its former glory in the 1950s, as were the late Baroque Belvedere in the park and the New Pavilion in Classical style.
The most famous paintings housed in the Palace are those by the French genre painters Antoine Watteau, Nicolas Lancret and Jean-Siméon Chardin.

French artists and artists who chose to live in France also dominate, alongside the Swiss Paul Klee, the collection in the Museum Berggruen, which is in the building in Schlossstrasse that was originally the barracks of the Royal Guards. Pablo Picasso, George Braque, Henri Matisse and Alberto Giacometti spent a large part of their lives in Paris, as did the founder of the collection, the art dealer, journalist and writer Heinz Berggruen. 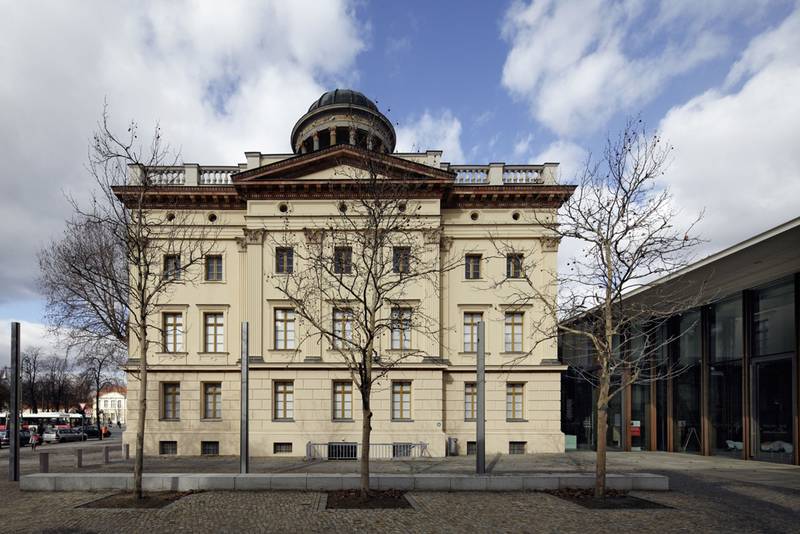 Like Cubism, represented here with paintings, objects and drawings, Surrealism, too, had its origins in Paris, and the Collection Scharf-Gerstenberg, housed in the building’s twin on the other side of the road, is devoted to Surrealism and its 18th and 19th Century precursors, with the entire range and diversity of its media and techniques on display, from Max Ernst frottages and René Magritte paintings, to collages by Jean Dubuffet and drawings by Hans Bellmer, to films by Luis Buñuel.

The Bröhan Museum next door to the Museum Berggruen presents Art Nouveau, Art Déco and Functionalism in their various different national manifestations. Room ensembles comprising furniture, carpets and rugs, lamps, small art objects and paintings bring the spirit of the epoch between 1890 and 1930 vividly to life. Here, too, there was a significant input from France, with furniture art by Hector Guimard, Sèvres porcelain and Emile Gallé’s glass art. 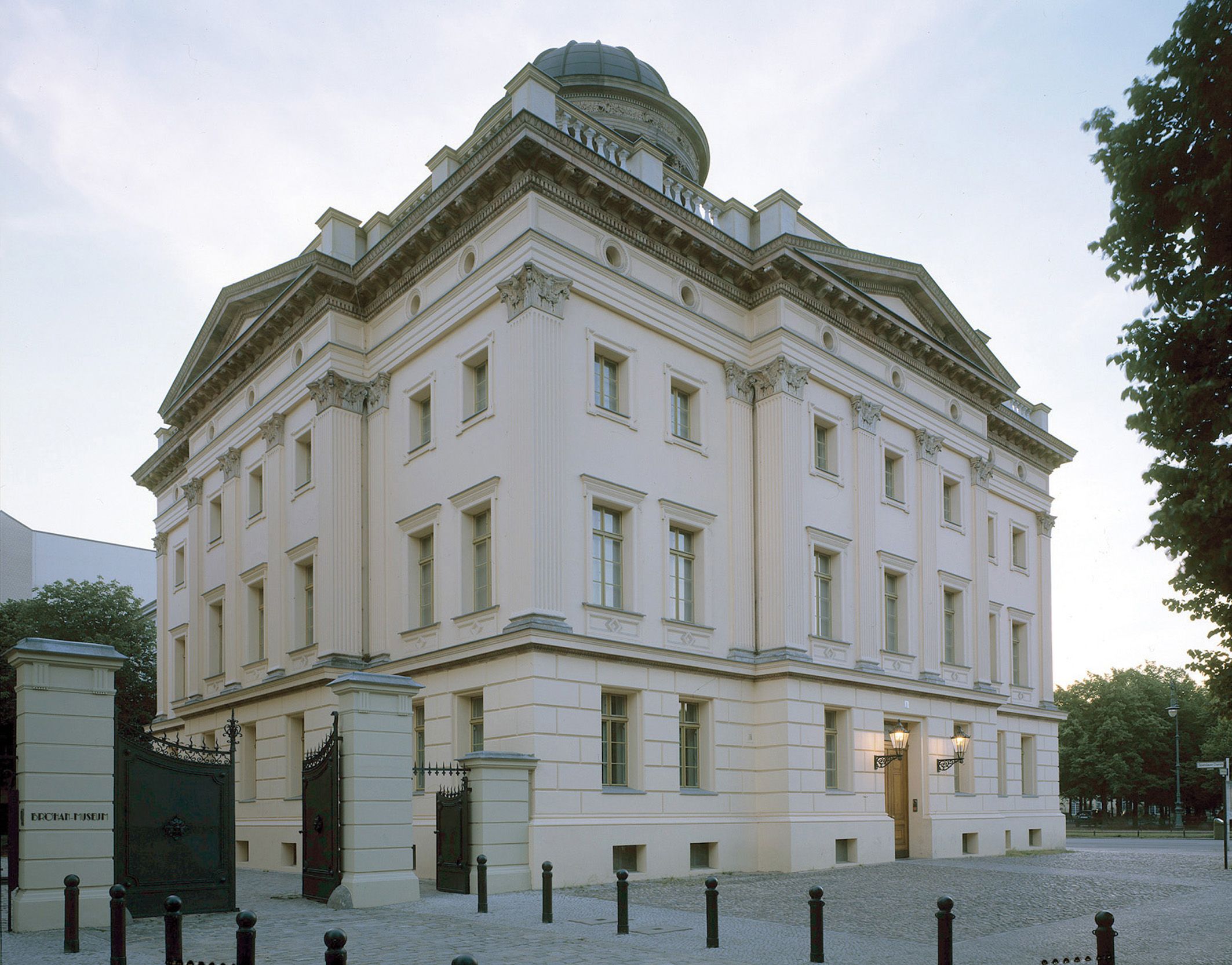 Besides the attractive interplay of different art forms and genres what all the Charlottenburg museums have in common is their origin as private collections. The furnishing of the Palace reflects the taste of its various residents, from Sophie Charlotte to Frederick the Great to Frederick William IV. The Museum Berggruen is named after Heinz Berggruen, the collector whose connoisseurship brought the collection together and was responsible for the diverse nature of the displays. On the initiative of his widow and children, an extension is currently under construction, which will open in March 2013. The Collection Scharf-Gerstenberg was assembled by Dieter Scharf, the grandson of the Berlin collector Otto Gerstenberg, while the core of the collection in the Bröhan-Museum was created by Karl Heinz Bröhan – also all great connoisseurs in their various areas.

Finally, anybody wishing to see the precursors that have influenced European art, the Classical art of the body which we find in Picasso’s work or the world of myths on which the Surrealists drew, should visit the collection of plaster casts of Greek and Roman sculptures that is also housed here.

Don’t Miss
The porcelain cabinet and the Palace chapel in the Old Palace, the Golden Gallery and Queen Luise’s rooms in the New Palace, Picasso’s ‘Reclining Nude’ of 1942 in the Museum Berggruen, Max Ernst’s ‘Le triomphe de l´amour’ in the Collection Scharf-Gerstenberg, Henry van de Velde’s furniture ensemble for Haus Bloemenwarf and Peter Behrens’ design for the Wertheim exhibition in the Bröhan-Museum.

How to Get There
Take the U7 underground train to Richard-Wagner-Platz or Sophie-Charlotte-Platz or the suburban railway (S-Bahn) Circle line to Westend and then it’s ten minutes’ walk. M45 and 309 buses stop right outside the Palace and the Museum Berggruen.

Where to Get a Coffee
In the foyer of the Collection Scharf-Gerstenberg there is a café which in the summer also has tables outside in front of the building. The Small Orangery in front of the Palace houses a large café and restaurant. Other cafés can be found in Schlossstrasse and on the eastern side of Klausener Platz.

To See Everything
The ticket for the Museum Berggruen is also valid for the Collection Scharf-Gerstenberg and vice versa. There are no other tickets valid for more than one collection.

Events
The Charlottenburg museum quarter is a regular venue in the Long Night of Museums that takes place in August. In late July and early August, the Cour d'Honneur of the Palace is the location for an open-air cinema, and there is a large Christmas market here from the end of November.