The Museum Island
6,000 Years of Culture and History

Six thousand years of culture and history are illustrated on the Museum Island, a panorama stretching from the Ancient Egyptians and the civilisations of the ancient Near East to Greek and Roman Antiquity and the Christian and Islamic art of the Middle Ages to European art of the 19th Century.

The New Museum from the south with the Old National Gallery in the background © Staatliche Museen zu Berlin, Photo: Maximilian Meisse

Six thousand years of culture and history are illustrated on the Museum Island, a panorama stretching from the Ancient Egyptians and the civilisations of the ancient Near East to Greek and Roman Antiquity and the Christian and Islamic art of the Middle Ages to European art of the 19th Century. The collections housed in the Museum of Prehistory and Early History extend the timeline even further to cover the whole of human history. Various different cultures come together in the New Museum, recently rebuilt by David Chipperfield, which houses not only the rich treasures of the Egyptian Museum and the Museum of Prehistory and Early History, but also the Collection of Classical Antiquities, the Münzkabinett (coin collection) and the Sculpture Collection, examples of all of which are displayed on the main floor to enable visitors to take an impressive tour from the early period of Egypt’s history via the Roman provinces and the Celts and Germanic tribes right through to the High Middle Ages. 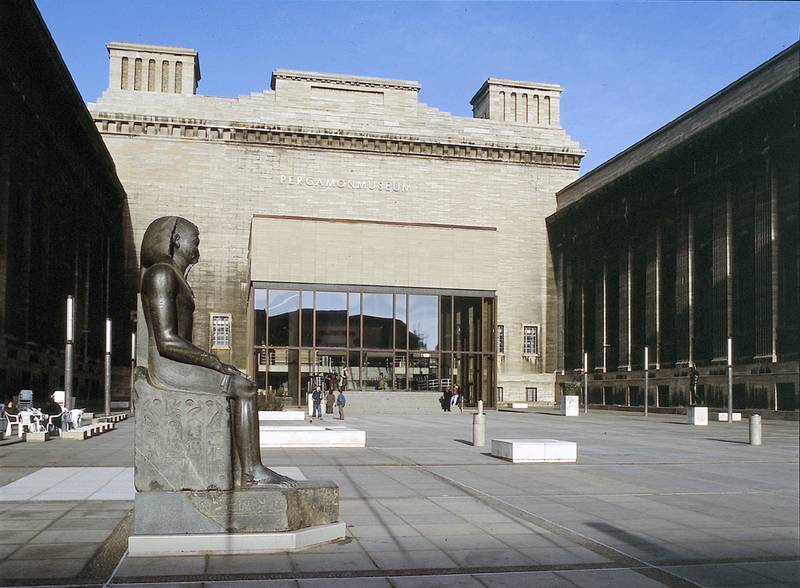 The Museum Island is most famous for the large scale architectural exhibits in the Pergamonmuseum, which were found during German excavations conducted in Western Turkey at the end of the 19th Century. The Pergamon Altar (closed for renovations till 2019), with its frieze depicting the battle between the gods and the giants, comes from Pergamon, while the market gate comes from the late-Roman city of Miletus. The main attractions in the Museum of the Ancient Near East, which also has some of the oldest examples of script on cuneiform tablets from Uruk, are the Processional Way and the Ishtar Gate from Babylon, made up from thousands of colour glazed bricks. Among the impressive exhibits in the Museum of Islamic Art are ceramics, glass, metal and ivory, carpets and book art, as well as the sandstone facade of an early 8th Century palace from the Jordanian desert.

The Altes Museum (Old Museum) offers an insight into the worlds of Etruscan, Greek and Roman art. Built during the empire period, the Bode Museum with its striking cupola houses the Sculpture Collection including works from all over Europe dating from the early Middle Ages to Classicism. You can also see Byzantine art of the 3rd to 19th Centuries here, as well as a selection of some of the most valuable coins and medals from Antiquity to the 20th Century in the collection displayed in the Münzkabinett.

The Old National Gallery, rising above the Spree like an Ancient Greek temple, was opened in 1876 to house the contemporary art of the time and today still has painting and sculpture from the 19th Century on show. The highlights are the rooms with the Impressionists and Caspar David Friedrich. 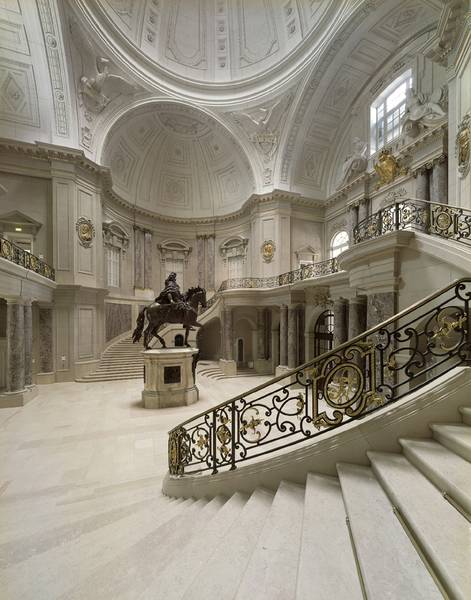 The Museum Island has been included in the list of UNESCO World Heritage sites not just because of its world-famous collections, but because it is a unique architectural ensemble of museum buildings. The five buildings were constructed between 1830 and 1930 by well-known architects and in their time were pioneering examples of museum architecture. While all that was faithfully reconstructed of Schinkel’s Old Museum after the Second World War were the impressive colonnade fronting the facade and the rotunda, the Old National Gallery’s interior is still largely original. The magnificent staircases, the Basilica and the Renaissance porticos and fireplaces put in by Wilhelm von Bode have been retained in the Bode Museum. In the New Museum, the language of Classical forms meets contemporary architecture in an impressive encounter; while some rooms still have columns, ceilings, floors and even decorative painting from the 1850s, the rooms destroyed during the war, including the monumental staircase, have been recreated in simplified forms in high-quality concrete.

Don’t Miss
The market gate of Miletus, the Processional Way and the Aleppo Room in the Pergamonmuseum, Nefertiti and the Berlin Gold Hat in the New Museum; the Berlin Goddess, the Praying Boy and the bust of Caesar in the Old Museum; Tilman Riemenschneider’s Four Evangelists in the Bode-Museum; Schadow’ s double statue of the Prussian princesses, Menzel’s Iron Rolling-Mill, Manet’s In the Winter Garden and Caspar David Friedrich’s Monk by the Sea in the Old National Gallery.

How to Get There
By underground (U-Bahn) or suburban railway (S-Bahn) to Friedrichstrasse or Hackescher Markt and then it’s five minutes on foot. Travelling by bus, the 100 and 200 will take you four or five stops from Brandenburger Tor or Alexanderplatz to the Lustgarten.

Where to Get a Coffee
In the café in the Bode-Museum (above the portico) or in the small cafeteria in the Old Museum. Until the entrance building in front of the New Museum has been built with a large café and restaurant, there are still plenty of attractive places in Hackescher Markt or in Georgenstrasse.

Events
One or two of the museums are regular venues in the Long Night of Museums in August. There are occasionally concerts and theatre productions in the stairway hall of the New Museum. On Sunday evenings during the summer months there are free concerts outside the Bode Museum. There are concerts, readings and discussions in the Museum of Islamic Art during the Nights of Ramadan cultural festival.